Играет как умеет (Plays the best he can, symphony, 350)

One composer with a foreign military band, consisting of people with the letter Y, wrote a symphony.

It can be difficult for an unprepared listener to hear everything that is needed in it, so the author kindly suggests starting with a warm-up.

Inspecting the attachments, we can see the PDFs are sheet music with some rather intersting patterns: super fast tempo (1500 BPM), full bar rests are written as 4 quarters rests instead of a full rest, all notes are quarter notes, the “chords” are very packed and spans across an unusually wide range of octaves. 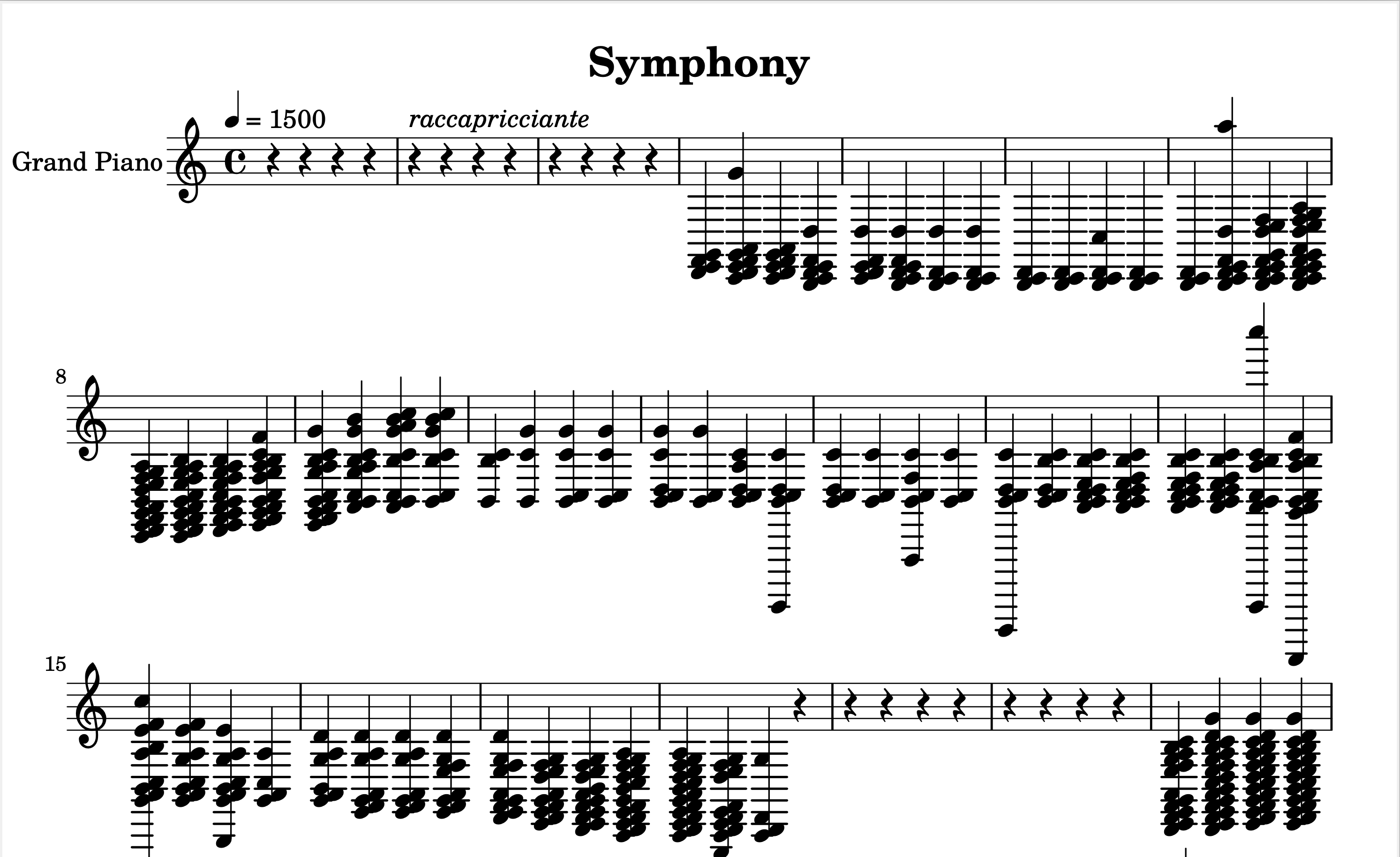 When I first saw the sheet, my first idea was to look for an Optical Music Recognition (OMR) tool and play it. However, due to the fact that the chords are too packed, no OMR tool we tried was able to handle them.

Inspecting further into the PDF files, the metadata suggests that the PDFs are generated with GNU LilyPond, a music notation software. Although no LilyPond source was embeded, nor decompile tool was found for LilyPond PDFs, fortunately the PDF was drawn with rather simple elements: glyphs, lines and rectangles.

With the rather structural format of the sheets, we can parse the elements in the PDF and attempt to reconstruct a MIDI out of it.

We first pulled out PDFMiner to convert the PDF into XML for easier parsing.

While reading the XML output, we realized that it defaults to WinAnsiEncoding for non-standard fonts which can be confusing for CIDs less than 32, I adjusted the source for it to output the raw CID for any CID below 4. (The musical notation font embeded only has 4 glyphs: Note Head (𝅘), Quarter Rest (𝄽), Common Time (𝄴), and G Clef (𝄞).)

As we know, the placement of G Clefs on the staff signifies the key of all notes on the same staff, we can use the clefs as a reference to determine the key based on their relative Y-axis difference. Since the G Clefs are placed on the most common location, we can know that middle C would be on the first ledger line below the staff.

With the following information, we can write a script to reconstruct the MIDI from the parsed PDF.

Using the parsed timing and pitch information, we reconstructed the MIDI using MIDIUtil. Opening the MIDI file with a Piano Roll editor, we can see a very characteristic pattern.

The pattern resembles the shape we commonly see in spectrograms of human speech, of which we can further confirm when we plot the same MIDI with frequency as the Y-axis.

This reminds me of Talking Piano Illusion – an auditory illusion where despite only hearing a piano playing, when some words are shown in front of you, the piano sound would turn into voice in your brain. This is conducted with the sound played on the piano matching with certain frequences of the spoken words. While listening to them alone would not make any sense, once the words are shown to you, your brain will automatically bridge the gap to allow you “hear” the words.

However, the illusion would only work if you already know the words, but in an CTF, you are supposed to figure out what was actually spoken. We have tried to adjust the instruments and tempo to make it sound more like the speech, but with no promising result. As given in the “warm-up” sheet, the instrument is indicated as “Blown Bottle”, which is one of the General MIDI Program instruments. We definitely tried that too, but it did not sound much better.

Inspired by Game & Gig, we decided to try playing it with Sine Wave as the instrument. This time it sounds much better, despite that we still cannot make out the full flag. We used Nekodigi/Midi for this purpose, and this is what we got.

Since we know that this is going to be a flag, the format would be ugra_<word>_<word>_..._<hex>. So the first 5 clusters must be corresponding to U, G, R, A, and _. With this piece of information, we can partially recognize some of the words read.

And so does the warmup audio.

However, even we have the full alphabet, it is still hard for a human to match up one to another. We had to resort to comparing the flag against the alphabet using data.

Both symphony and warmup are pretty well divided between words. We can easilly break down the sheet into words when two clusters are over 5 bars apart. Once we have the set of clusters in both sheets, we can compare the ones from symphony against each cluster in warmup and look for the most similar one note-by-note. The algorithm comparing them is rather simple:

Using this simple metric, we finally managed to find all the words in the flag.

Now, let’s listen to symphony again with the correct words.

Can you hear it now? Congrats!

Fun fact: Project SEKAI is the only team in the contest that solved this challenge.